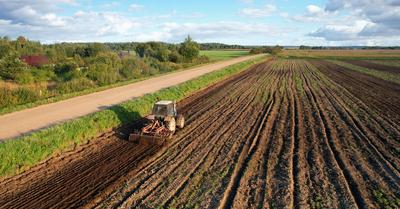 Our mission is simple, to provide you with well-researched, informative, objective and trustworthy information. And while delivering high-quality content to our readers is not always easy, we have a team comprising of highly experienced journalists, researchers, and industry experts, which has always ensured we consistently deliver on this goal. So, if you happen to come across any of our content pieces, you can be read it confidently knowing the information contained therein is credible.

Arable land refers to any type of land that can be plowed to grow crops. It also refers to land that’s temporarily under agricultural production such as meadows for mowing, kitchen gardens, pasture land as well as land under market gardens.

According to a report published by the Food and Agricultural Organization was around 1.4 billion. Today, the acreage under arable land stands at around 1.5 billion, which represents approximately 11% of the world’s land surface.

It’s also worth mentioning the distinction between arable land and non-arable land. According to the Food and Agricultural Organization, there are various types of land that fall in this category.

Also, any piece of land that is not ideal for agricultural production is considered non-arable land. And this may include various pieces of land that have various limitations like desert areas without adequate water for irrigation, excessively wet areas, lands with excessive salts, extremely stony and steep areas as well as land in various that encounter adverse climatic conditions are all considered non-arable land.

As mentioned earlier in this article, non-arable land is land that’s can’t be cultivated to produce crops. However, this doesn’t that this situation is permanent. Thanks to advancements in farming technologies, some non-arable land can now be converted into arable land and used for cultivation.

Some of the methods used to convert non-arable land to arable land include installing desalination plants, digging irrigation canals, planting shade trees in desert areas, installing greenhouses, reverse osmosis of water, and the application of nitrogen fertilizers and pesticides.

Reclamation of seawater is yet another method that has been successfully used to convert non-arable land to arable land.

However, it’s worth mentioning that most of the sustainable methods used for converting non-arable land to arable land are quite expensive. Hence, they can only succeed where there’s adequate capital investment. And this explains why most of the conversions have been taking place in developed countries.

Arable land refers to land that is currently being used for cultivating crops. This mainly refers to land whose crops require replanting within a certain period. The duration for re-planting will depend on the type of crop and the weather conditions.

This type of agricultural land refers to land that has permanent crops that don’t need annual replanting. This will include land with vineyards, coffee bushes, nut-producing trees, orchards and rubber plantations, among others.

As you may probably know, these types of crops may go for several years without the need for replanting. However, the land they sit on is still considered agricultural land, since it’s being used for agricultural purposes.

As for the available land used for cropland, approximately 28% is under row crops while permanent crops like orchards and vineyards account for approximately 3.1% of that land.

According to the same report, the amount of agricultural land under permanent pasture has been declining over the years. And this can be partly attributed to the decrease in wool production, due to a shift in synthetic fibers like polyester.

Countries with the Largest Areas Dedicated to Cropland

Indonesia leads the world when it comes to land dedicated to agricultural land. As of today, Indonesia has approximately 225,000 square kilometers dedicated to cropland, which translates to around 12% of its surface.

Other nations that have vast amounts of land dedicated to cropland include Brazil, Malaysia, the Philippines, Nigeria, Canada, Thailand and the Ivory Coast.

Sao Tome and Principe comes second at around 40% while Kiribati is a close third at 39%. Other countries that feature prominently on this list include the Marshall Islands, Comoros, Dominica, Micronesia, Grenada, Philippines and Malaysia.

As you can see, island nations dominate this list. The reason why Island nations may have large swathes of their land under agricultural production is that the climatic conditions in most islands can support a wide range of crops throughout the year.

In a nutshell, arable land refers to cultivable land, which can be used for growing crops or pasture feed. However, this excludes land that is currently under permanent crops like vineyards, rubber plantations, coffee plantations, or orchards.

In simple terms, arable land is one of the types of agricultural land. But, it’s also worth mentioning that in some jurisdictions, forestland may also be considered agricultural land, if it joins conservation reserve land.

At this point, you already know what constitutes arable land, what agricultural land is as well as the differences between these two terms. So, if you have a piece of land and you have been wondering whether it falls under arable land or agricultural land, you now have the answers.