How Big Is A Parcel Of Land? 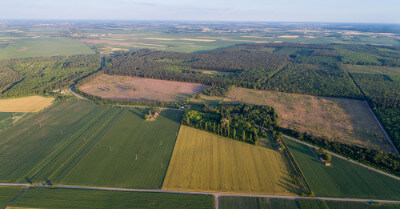 If you’re hunting down real estate, you are likely seeing land being described as a ‘parcel’, which may leave you wondering just how big a parcel is.

A parcel (or plot) of land can really vary in size depending on its location, features, and whether or not the original parcel has been subdivided into different properties.  Typically a parcel of land will be anywhere from 1/5th of an acre to 160 acres in size.

Given that parcels of land can have such a range in size, it can be a bit confusing when seeing properties described in this way.  When this occurs, you should always look into the exact specifications of the parcel to get a realistic measurement of the property.  We often see parcels being used to describe lands that are larger in size, as this can sometimes make it easier for certain buyers to pinpoint properties that are suitable for specific real estate projects.  However, you will find that many private homeowners living in urban and rural environments also acquire parcels of land.

When acquiring a parcel of land, you will likely be purchasing your real estate through the Bureau of Land Management, a private land trust, or a private property owner.

Since land parcels can either be quite small or significantly large, it helps to understand how the property size will correlate depending on the land classification, its location, and what it will be used for.

The fact that parcels of land vary so much in their size, means you can find them just about everywhere.  This is contrary to a more traditional association of land parcels being located almost entirely where there are large open spaces, which are typically found in rural environments.

With that being said, it’s actually quite common to acquire parcels of land that are located in urban environments that also range in size.  While it’s not as likely that you will find as many options for land parcels that come even close to being as big as the ones you find in rural environments, it is by no means impossible.

The more traditional and appropriate places you would tend to find parcels of land would be out in the countryside.   The reason for this is real estate buyers and property owners living in rural environments are often dealing with properties that span multiple acres.

Whereas in an urban environment, most private homeowners are dealing with parcels of land that are relatively small and can generally fit into just a fraction of an acre.

The parcels of lands you find out in rural areas will generally be a minimum of 1 acre and can go up to as much as 160 acres.  That’s why parcels of lands out in the countryside are often used for more industrial reasons and are not always looked at by individuals seeking to build a home.

However, that is not to say that a parcel of land located in a rural area does not have the versatility to be used for something other than industrial business projects.  Many real estate buyers and private homeowners are regularly acquiring small and large parcels of land in rural areas, as they have many benefits that many urban environments lack.

Let’s take a look at some size comparisons for parcels of lands located in rural areas.

Perhaps one of the most common parcels of land that you will find out in the countryside will be designated for farming.

Given that farmland within the United States makes up almost 1 billion acres of land, there are a lot of land parcels that can fall under this classification.  Now, a single parcel of land, even at its largest size, will typically not be enough property to set up an industrial-scale farm.

This has changed greatly over the last century as farming became a corporate industry.  Traditionally, a medium to large parcel of land would be a perfect example of a farm, which would amount to about 160 acres.

Today, the United States Department of Agriculture classifies a small farm as being roughly 230 acres, which means that you need just over a single parcel to fall into this category.  However, a large-scale farming operation is classified as over 1,400 acres of land.  To set up a farming operation of this magnitude, you would need to acquire multiple parcels of land.

What you will commonly find a single parcel of land is perfectly suitable for is your average size Community Supported Agriculture (CSA).  These small community farms are typically much smaller in size and located in rural areas outside of cities and towns.

When we drive out into the countryside, we will often see industrial areas that have been set up for things like factories.  Given that rural environments tend to have such a large amount of affordable space to offer, it makes them suitable for pursuing industrial business ventures.

A parcel of land required for industrial factories can vary quite a bit in size depending on what the factory is producing and at what scale their output is.

One common use for an industrial parcel of land is a large warehouse used for shipping and storage.  These parcels of land can typically be found at about a minimum of 2 acres in size for relatively small warehouses.  However, some of our largest shipping warehouses can require a parcel of land that is as large as 130 acres in size.

On the other hand, a small factory in the United States can require a parcel of land anywhere from just a dozen acres to up to almost 100 acres.

Throughout the United States, we have millions of acres of land that are classified as raw or vacant.  This means that they are either completely untouched with no development on them whatsoever - or they have been mildly utilized in some way but have no immovable development on them.

These parcels of land can also vary in size but are more often than not quite large.  The reason for this is that the properties have likely not been divided to such an extent and have remained in the state that they are in since they were acquired by either a land trust, private individual, or the state or federal government.

When analyzing parcels of land that are classified as raw and vacant you may see properties that are in the hundreds of acres.  With that being said, you can easily acquire raw and vacant lands that fit into a single parcel of land that is 160 acres or even much smaller such as just a few acres.

Overall, how big a parcel of raw and vacant lands is will be can be determined by the potential that the land has for development projects or other business ventures such as industrial ideas or farming.

When analyzing parcels of land for residential use, your numbers will often be much smaller and simpler to assess.

The reason for this is that you don’t necessarily need such a large parcel of land to set up your private residence.  Most people acquire parcels of land that are typically about 1 or 2 acres large to build their home out in the countryside.

However, this number can also greatly fluctuate based on the homeowner’s ideas and future ambitions.  Many homeowners purchase larger parcels of land in rural areas because they like the idea of having space for things like gardening, cattle, or simply privacy. In this case, it’s not uncommon to see private residences that are on a parcel of land that is 5 or even 10 acres large.

In addition, some homeowners buy exceedingly big parcels of land that can be as large as well over 100 acres.  The most common reason they do this is to either invest in the land for future opportunities such as setting up an industrial farm, selling off the land later onto an industrial or commercial buyer, or to dividing the property into different parcels and sell them off individually to private buyers.

While parcels of land can more commonly be associated with rural environments, that’s not to say that you won’t find them scattered around large cities and small towns.  It is far less common to find a parcel of land anywhere near as large as rural property, but the prospect of buying a small to medium land parcel of land is very realistic.

The biggest difference that determines the size of an urban parcel of land is its intended use.  Given that rural areas are often designated for specific land uses that occupy a lot of space, the parcels of land you find in urban environments will be far less industrialized.

Let’s take a look at some examples of how big a parcel of land is when located in an urban area.

Many homeowners these days are opting for purchasing a vacant lot as opposed to a fully developed home, as they tend to be significantly cheaper and offer different creative opportunities.

These are common properties that individuals acquire in urban areas and they tend to be the smallest parcels of land available on the market.  You can typically find a parcel of land in a relatively condensed urban area to be about 1/5th of an acre in size; this is about as small as parcels of land get.

However, small towns tend to have a little more room to play around with and can be far more versatile in size.  You can expect a home in small towns to be anywhere from half an acre to 3 acres in size - or even more in some cases.

A common reason individuals buy parcels of land in urban areas is to set up a commercial business.  These businesses generally require a far bigger area to be established, which will amount to some of the biggest land parcels located in cities and towns.

Whether it’s to build a shopping mall or a car dealership, the average amount of space for a parcel of land with these intentions requires at least 2 to 10 acres of land.

A smaller commercial business may need just 1 to 3 acres of land.  Whereas a larger shopping mall can easily use up to 10 or more.

Ultimately, how big a parcel of land located in an urban environment is will be greatly determined by what space the property lines are confined to.  This is often contrary to a parcel of land in a rural area, as space is vaster and more versatile.

Types Of Wells & How To Choose

What Are The Three Stages Of Land Development?

What Does G5 Undeveloped Land Mean?

What Are The Types Of Land Development?

What Does Residential Undeveloped Land Mean?

What Is The Land Development Process?

What Is The Difference Between Improved And Unimproved Land?

How Much Land Does The Queen Own?