How Much Land Does Amazon Own? 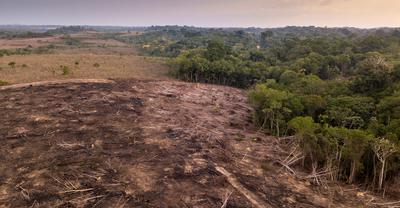 Anyone living in the modern age has watched the rampant pace at which Amazon has grown.  But just how much land does the corporate giant own?

Amazon owns roughly 420,000 acres of land.  This number is based on all properties acquired by the Amazon Corporation and its executive chairmen, Jeff Bezos, which includes all farmland, warehouses, and alternative business projects the company owns.

At the moment, Amazon owns more land than most companies around the globe, as they have ranked number 25 for most acres of land in possession.  This comes with little surprise given that we have seen Amazon transition from being a humble online bookseller to the corporate empire it is now.  In addition to its mainstream success in our consumeristic society, the company has made the founder, Jeff Bezos the richest man on Earth - with a net worth of $205 billion and counting.  That means a whole lot of cash for buying land and just about anything else he wants.

Information about Amazon and the amount of land that they own can easily be found on the ‘About’ section of their U.S. or U.K. store’s website.

The amount of land that Amazon owns is immense and what’s even more interesting to think about is just how much more land the company will acquire over the coming years, as their growth and expansion are only getting larger on a national and international level.

Given that the corporate giant owns 420,00 acres in real estate, they already make up more than half the size of Rhode Island in land owned.  Much like any smart investor, Jeff Bezos and his corporate institution are approaching land like any real estate tycoon would - buying up more than they need.

With that being said, having more land than you actually need is rarely a bad thing.  Market trends associated with land investments have shown us that properties tend to do one thing very well - go up in value!

This makes land investments one of the safest and most reliable investment opportunities, regardless of whether you are thinking about a short-term flip or holding on to it for the long haul.  This doesn’t really matter to corporations like Amazon, as they have more money than they know what to do with, and opting for a land investment opportunity that goes south is not going to break their bank.  Let’s take a closer look at how much land Amazon owns by examining how they use their properties.

Throughout the United States, we have watched Amazon warehouses pop up all over the country in the form of ‘sortation centers’.  These giant warehouses are where Amazon handles all of their packages and begins the process of transporting your desired goods to your door.

It’s precisely these fulfillment centers that have made Amazon such a successful and efficient enterprise - with packages being processed faster than any other shipping service.  However, the same-day shipping that these Amazon sortation centers have successfully achieved does require a decent amount of space to meet their acclaimed delivery standards.

At the moment, Amazon currently has 175 sortation centers around the globe.  This takes up a considerable amount of land since each warehouse is generally over 1 million square feet in size and some even getting as big as 2 or 3 million square feet.

These giant facilities are scattered around the United States and some of their largest warehouses can be found in the following locations:

There are more Amazon fulfillment centers in the works, with their biggest one yet scheduled to open in Colorado.  Their largest warehouse will be a 4 million square foot project, which will cost Amazon just under $400 million to complete.  These warehouses will likely continue to occupy even more land inside and outside the United States in the coming decades, as Amazon continues to grow as a corporation.

It’s becoming a much more common investment for billionaires to put their money in land purchases that may actually be peculiar to some - farmland.

These real estate purchases don’t quite have the glamour and appeal that we would associate with some of the richest people in the world, but billionaires would beg to differ.  As opposed to buying expensive real estate properties within urban environments, farmland offers a lot of potential as an investment opportunity for the future.

Despite the fact that the land could be used for growing food, which is itself a business opportunity for many, the farmland could be used in more versatile ways to pursue other financial opportunities.  The land itself will probably become more valuable over time but this is not likely the way Jeff Bezos views the investment.  Instead, he is acquiring farmland to reserve space for future Amazon warehouses or to establish the creation of newer ideas.

That’s why Amazon now owns 290,000 acres in farmland alone, which is mostly located in West Texas.  Aside from the unknown long term goals that Jeff Bezos may be cooking up with his massive amount of farmland, we know that a chunk of this property is allocated specifically for his mission of conquering outer space.

With that being said Jeff Bezos’ 290,000 acres of farmland has 30,000 acres specifically designated for his space travel company, Blue Origin.  This newly established space flight facility has its primary base set up within Jeff Bezos’ farmland, which is where they test and launch their space crafts.  However, Jeff Bezos has opened up nearly his entire 290,000 acres of farmland for any tests that Blue Origin may need to fulfill outside their official base.