How Much Land Does China Own? 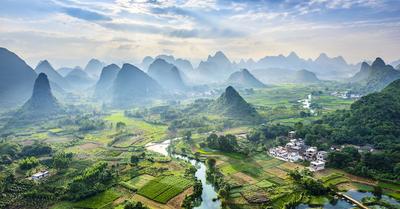 China’s real estate investments have made headlines over the last few years. But how much land does China really own in foreign countries?

China owns hundreds of thousands of acres of open land and housing around the world. China and Chinese investors own around 200,000 acres in the United States—but much more in Asia and Africa.

In this article, we’ll cover how much land China owns in the United States and Canada. Additionally, we’ll go over Chinese land ownership and investment in Europe, Africa, and Asia, along with its land-related initiatives in South America.

We sourced the information used in this article from numerous sources, including the U.S. Department of Agriculture and independent news organizations.

‍Why does China Own Land in Foreign Countries?

China owns land in foreign countries primarily for investment, but some of it is also used for agriculture. China has an enormous population (1.398 billion people) and limited useful agricultural space. Agricultural land has strategic and investment value, especially for China.

Decades of serious environmental degradation have made a huge impact on China’s farmland. In 2014, the Chinese government said that around 20% of the country’s farmland is polluted. Owning hundreds of thousands of acres of clean foreign farmland can be a strategic asset in case of shortages and other food supply issues.

China also uses the land for influence, as it can drive up the prices of properties in an area or drive them down by dumping its holdings. This may not be the main intention of Chinese real estate investment, but it certainly is a measurable effect in many areas, such as Vancouver.

On an individual scale, buying land is a very profitable business for normal Chinese citizens. Purchasing and holding apartments is an extremely common practice in China, and it’s a pretty reliable way to make money. Foreign land investment is a particularly attractive prospect for Chinese investors as well.

Can Chinese Citizens Own Land?

In China, the land is collectivized—which really means that the government owns it and leases it to localities or developers for a price. Chinese citizens can ‘buy’ apartments built on leased land, but they can’t truly own a piece of property in the country.

But that’s just China. The vast majority of countries allow individuals (citizens and otherwise) to own land in a true sense. And more importantly, they allow individuals to profit easily from its sale and use.

China allows its citizens to buy land in other countries and to profit from it. And with so much capital and real estate investment experience floating around in China, it’s easy for normal upper-middle-class Chinese citizens to earn money from their foreign land investment.

How Much Land does China Own in the United States?

China and investors tied to the CCP own just shy of 200,000 acres of various types of land in the United States. The vast majority of this land is farmland, but the Chinese government and investors also own other kinds of real estate.

As of 2019, a total of 191,000 acres of American land were owned by China. This is just a small part of the 30 to 35 million acres of foreign-owned land in the United States. But how much land is it, and what does it mean?

China’s U.S. land holdings are worth around 2 billion dollars. According to the USDA, China’s American land holdings have grown “more than tenfold in less than a decade.” This is alarming, as the motivations behind China’s strategic interest in U.S. farmland are unclear.

However, this figure is not quite as alarming as it sounds. Out of around 280,000 properties sold to foreign investors in 2018, about 40,000 were purchased by China—just a fraction of the 5.34 million homes sold overall that year.

The spike in Chinese land ownership began around 2010 and really took off in the following six years. However, China’s land investments in all of North America only make up a very small fraction of its total land ownership.

How Much Land does China Own in Canada?

A few years ago, China made headlines for purchasing an unusually large amount of farmland in Saskatchewan. The motives were unclear, but the large volume of land investment in the region by China-based investors has likely contributed to a 10% to 50% rise in land prices.

Saskatchewan has laws preventing large-scale land investment by foreign interests. According to local laws, only Canadians can purchase more than 10 acres for investment. These laws are designed to prevent large-scale landholdings from going unused and driving up prices for local farmers who depend on it.

But China’s most lucrative land and real estate holdings are in Vancouver. According to the National Bank of Canada, a whopping 1/3 of the Vancouver, B.C. real estate market is owned by Chinese buyers.

The large amount of investment property purchases made by Chinese citizens has been a major factor in the increasing costs of housing in the city. Additionally, a large majority of real estate owned by Chinese investors in Vancouver is left totally unoccupied and held only for investment.

Africa has been a major target of Chinese land investment and infrastructure projects. The majority of Chinese land owned in African countries is agricultural investment land, and it’s unclear how much of it is used or just held for profit.

According to the Central African Research Institute, China owns about 253,000 hectares of land in various African nations. That’s about 625,000 acres, and roughly three times more than the amount of land China owns in the United States.

The answer is complex, but here’s how the Belt and Road Initiative works. Countries that need modern roads, bridges, and other infrastructure sign onto the program. China sends in supplies and workers and builds the infrastructure at a relatively low cost, and the country takes on the debt.

In many cases, the land used for Belt and Road infrastructure projects isn’t ‘owned’ by China, but the debt acquired by developing nations grants China control over it.

And it isn’t just developing nations—many European countries have signed onto the program with the hopes of modernizing their infrastructure on credit.

Much of the Belt and Road initiative has been focused on Central Asia and Africa, with some analysts claiming that China is attempting to rebuild its ancient Silk Road trading routes. Other projects have taken place in South America, and an increasing amount of Chinese investment is pouring into Europe.

Where does China Own the Most Land?

China is a major proponent of land investment. Or, that would seem to be the case, as Chinese investors own millions of acres of various types of land across the world. And if news headlines were the only thing to go by, it would seem like the majority of China’s foreign land investment is in North America. But it’s not—not by a long shot.

The vast majority (52%) of China’s land investments take place in Asia. And that number only includes foreign land investment—not land purchased within Chinese borders. Siberia is a major target of Chinese land investment, primarily for logging.

China doesn’t own all of the land it logs in Siberia. Instead, over 500 Chinese firms operate in the Russian Taiga and contribute to about 30% of China’s lumber use each year. And it’s cheap—at just $2 per hectare for forest land, Chinese investors can log an entire acre of dense forest for less than one U.S. dollar.

Chinese interests own millions of more acres in other Asian countries, which are used primarily for agriculture and investment. The next biggest continent with Chinese land ownership in Europe, which makes up about 15% of their total foreign holdings.

Much of this land is agricultural, but there’s also plenty of houses and infrastructure projects with Chinese money involved. Italy recently signed onto China’s massive Belt and Road Initiative. At this time, around 20 other European countries have signed on in some form to the massive initiative.