How Much Land Does Kyle Bell Own? 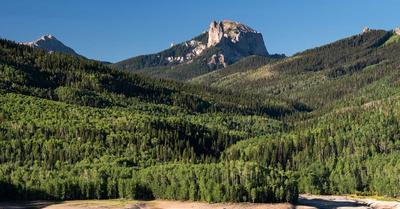 If you were fascinated by the dynamic father-and-son duo of Kyle and Ben Bell from Mountain Men, you’re probably wondering about how much land Kyle Bell owns.

Kyle Bell owns over 45,000 acres of private land in Cimarron Valley in northeastern New Mexico where he resides with his wife, LeVonne Bell, and 15-year-old son, Ben Bell. The family runs Folsom Outfitters, which is a full-time outfitting company specializing in western big game hunting.

You’ve probably been following History Channels’ Mountain Men, a reality television series that follows the lives of people who choose to live off-grid. I bet you’ve watched Season 3 and 4 and were most probably fascinated by the captivating lives of the father-and-son duo of Kyle and Ben Bell. Well, Kyle owns 45,000 acres of rugged land in Cimarron Valley in New Mexico. Do you want to know how Kyle and his family use this huge piece of land in the mountains? This article offers a glimpse into a unique lifestyle that seems alien to most of us.

In addition to having followed Kyle Bell in Mountain Men, I’ve always had a keen interest in Kyle Bell’s lifestyle. Although I’ve personally not been to Kyle’s land, I’ve talked to several visitors to the land. I’ve also scoured through the internet to get every piece of information on Kyle Bell and his land in Cimarron Valley. For example, I did derive info from Guidefitter and NationWide Guides on what their members say about Kyle’s land and his outfitter company.

Over the years, Kyle has not only been able to build an exceptional reputation as a successful mountain hunter in New Mexico but has also been able to amass over 45,000 acres of private land in Cimarron Valley. As one of the most successful characters in the Mountain Men reality show, Kyle is estimated to have a net worth of at least $3 million, which makes it possible for him to own such a massive piece of land.

What is He Using the Land For?

If you’ve been to northeastern New Mexico, you’ll agree with me that this is a gorgeous country that has a well-known reputation as the home of big bucks and bulls. This is because most of the ranches in the area are well-managed through a superb system of Private Landowner Permits. It is through this system that Kyle owns his enormous land that never seems to lack big game. But instead of running a cattle ranch like some of his neighbors, Kyle uses his land as a hunting camp that offers big game hunting that will most likely have you planning for a return trip soon.

Kyle and his family own Folsom Outfitters, which is a full-service outfitting company that offers gamers the chance of big game hunting. Kyle and his family use this massive land to run this A-class hunting and ranching camp in the Folsom Community. Kyle’s land is, without a doubt, one of the most beautiful pieces of land in Cimarron Valley. While here, you’ll experience the hunt of a lifetime in one of the most gorgeous but very rugged landscapes in New Mexico.

What are Some of the Big Game in Kyle’s Land?

Whether you want to bugle up a stately Rocky Mountain Bull Elk, stalk a mossy horn mule deer, or go for a big antelope in a distant herd, Kyle’s land has all the big games that will make your Western dream hunting escapade a reality. You can also go for a black bear, Pronghorn antelope, whitetails, bison, and Merriam’s wild turkey.

Even though the $7,000 hunting fee that you’ll pay Kyle to hunt on his private property includes permit and license fees, Kyle will organize the permit for you. This permit is offered by the New Mexico  Game & Fish Department, which uses records of herd population and harvest to help in determining the number of permits and licenses that are issued during each upcoming hunting season.

The main idea here is to create proper game management that can help in promoting quality game harvest rather than quantity game hunt, which is commonplace on public land. This is one of the main reasons why it's much more beneficial to hunt in private properties such as Kyle’s land.

Hunting in Kyle’s land is thrilling but you’ll have to book for the hunt. And because you’ll be hunting with a Celebrity Star, you can bet that it won’t come cheap. For example, it will cost you $7,000 inclusive of the license fees for a five-day guided trophy Rocky Mountain Elk hunt. This, of course, doesn’t include meals, lodging, and any other cost that might include taking care of the meat if the hunt is successful.

If you pay the hunting fee, Kyle will probably invite you to go down there and experience what entails hunting with a modern-day mountain man. Kyle’s wife, LeVonne, and his son, Ben will probably welcome you to the hunting camp. LeVonne will brief you on various details including non-hunting details. This will include important details about the beautiful bunkhouse, food, snacks, and dining. I did find out that the food served at the bunkhouse is excellent, and is served family-style.

A friend of mine who has visited Kyle’s hunting camp admitted that the bunkhouse is well-stocked and comfortable. It may seem rustic but it has two huge TVs and a satellite. Kyle will also share with you various logistics and hunt details.

As I noted earlier, Kyle’s land is very huge and it’s impossible to cover it all during your hunting escapade. You’ll come across various elks and other wildlife but probably will never come anywhere near covering the entire property. Depending on the season, it will either be hot and windy or snowy and very cold.

Given how enormous Kyle’s land is, it supports a huge population of game and is not heavily pressured. Although you’ll be hunting for game up the mountain, you’ll move around in Kyle’s truck to help you deal with the fatigue that might come with covering many miles. The most important thing about hunting in Kyle’s land is that he’s not only a very experienced outfitter but also a real guide with a very storied history.

Despite being massive, Kyle’s land may seem smaller when compared to other private land hunts. However, you’ll agree that he knows his property so well just to make sure that your hunting escapades are a success. For example, Kyle will never take you out when the conditions and the movement of the game aren’t favorable. In other words, he’ll employ a strategic approach with the main intention of ensuring that he gets you in front of an elk.

Below is additional hunt information on Kyle’s land.

Kyle’s hunting style is a bit different from what you’ve experienced somewhere else. Given his hunting skills and experience, the main priority is to ensure that the elk aren’t spooked off. In most cases, his hunting style is based on making lots of stops and glassing. He’ll try as much as possible to coax the big game in his range but won’t struggle much to chase those that saunter off out of range. This is perhaps because there is a lot of wildlife on his property, so he isn’t worried if a few run away.

One of the most noticeable drawbacks of hunting with Kyle in his land is that he won’t give you a lot of room for your opinion on what should or shouldn’t be done. This doesn’t, however, mean that you can’t have an opinion but it’s quite difficult to challenge what he’s doing.

All in all, it’s a great experience to visit Kyle’s massive land and perhaps get down to some hunting activities with him. Besides his captivating stories and the exceptional amenities offered in the property, this is a wild private property that gives you the chance of getting up close and personal with what you’ve been seeing Kyle and Ben Bell do on TV.