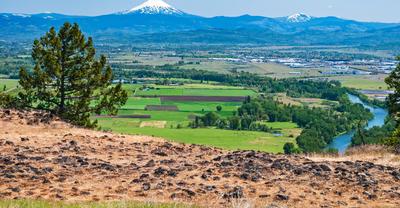 Purchasing land in Oregon is one of the best investments you can make for your future. So what are the pros and cons of owning land in the Beaver State?

In this article, we will list the pros and cons of owning land in the beaver state. In addition, we will also provide a brief overview of reasons to move to rural Oregon, examine how well the state is performing economically and provide a few tips for purchasing land in Oregon.

Our highly qualified and well-experienced team of researchers, writers, and editors is committed to providing you with the most relevant, accurate, and informative content on the web. We conduct thorough research, condense information into an easy-to-read form, and edit our content meticulously in order to ensure that everything is relevant to your needs.

The Beaver State is home to some of the most spectacular natural sceneries in the USA. Wherever you are in Oregon, you are never more than two hours away from the sea, desert, forest, or mountains. Nature is one of Oregon’s biggest draws, with nature enthusiasts moving here to enjoy natural attractions such as Crater Lake, Multnomah Falls, and the painted hills.

Oregon’s population grew faster than the national average between 2010 and 2020 while also experiencing a 3.4% increase in GDP in 2022. The largest industries in Oregon include Agriculture, fishing and forestry, tourism, manufacturing and mining, and energy. Oregon was ranked no 6. For job growth in the 2021-2022 period, and the state had more job vacancies than workers to fill them for several months during this time period. The state also has an unemployment rate of just 4%. Salaries also tend to be higher in Oregon, with the average worker earning $67,058 and salaries ranging between $23,400 and $412,000.

Housing costs and the cost of living are a bit higher in Oregon compared to other states, but this is mitigated by high salaries and the fact that workers can choose to work in rural areas as opposed to large metro areas. Below are several pros and cons of owning land in Oregon.

The price of farmland in Oregon has undergone a 3.7% increase over the last 20 years. An acre of land costs an average of $3,120 based on 2019 prices and is about a thousand dollars cheaper than the national average of $4,442. Around 15.9 million acres of land in Oregon is farmland, with the average farm size being 425 acres. Whether you are looking for a large property for commercial farming or simply want to build a self-sufficient homestead, Oregon has something for you.

Oregon is great for homesteading thanks to fertile soils, the availability of large tracts of land and a varied climate that allows you to choose the type of homestead you want. The state is popular with homesteaders and records show that there were a total of 62,926 homesteads covering a total acreage of 10,513,945 as of 2012. Owning land in Oregon allows you to homestead and take greater control of what your family eats, save on food and rent costs and even make money by selling surplus produce and animal products.

Oregon’s population grew by 10.6% between 2010 and 2020, and at a higher rate than the national average of 7.4%. While the pandemic has led to a decrease in this number, more people are moving into Oregon than are leaving, and most counties in the state record population growth rates ranging between 2.1% and 3.4%. 70% of the people who moved to Oregon did so to take up jobs while others moved for retirement, for a slower paced life, and order to enjoy the natural wonders found in Oregon.

Owning land will allow you to take advantage of Oregon’s growing population in several ways. First of all, you can choose to invest in land that is near Oregon’s largest and fastest growing cities such as Portland, Salem, Bend, and Eugene. This will help you take advantage of the demand for housing near these cities. Homes in large cities like Portland continue to increase in price and the Portland Metropolitan area recorded a 16.3% increase in median price from $440,000 to $511,000.

The median price for homes in Oregon is $509,539 which is significantly higher than the national average of $374,900. In addition, home prices went up by 19.7% between March 2021 and March 2022. There is therefore a need for affordable housing near large cities and owning land in these areas is a great way to take advantage of this demand.

There is a huge demand for housing in metropolitan areas as more people move to Oregon’s cities to take up jobs. This has driven up housing costs and forced realtors and their clients to search on the outskirts of large cities for cheaper property. Owning land in Oregon and especially lots near or inside large cities will position you to take advantage of this demand and double or even triple your investment. Further, statistics show that cities like Portland are a seller’s market, which means that there the demand for homes is greater than the supply, allowing home and landowners to dictate the sale price.

If you are moving to Oregon to take up a job offer or to seek work, then it is worth investing in some land for your own use or for speculation purposes.  This is because the state has a great employment outlook and is expected to grow by 318,000 jobs between 2020 and 2030. 283,500 of these jobs will be in the private sector while government and self employment will take up the other 25,700 and 8,300 jobs respectively.

This job growth rate of 16% is the result of an economy recovering from the COVID 19 pandemic and the ensuing recession. The leisure and tourism sector in Oregon is expected to recover faster and contribute more jobs to the economy. This industry is expected to add 73,800 jobs as hotels, restaurants, campsites and other recreational areas reopen for business. This is also good news for anyone looking to own land in Oregon as it provides an opportunity to invest in the tourism sector by offering campsites and putting up accommodation for tourists and workers.

Other services are projected to be the second fastest growing sector. Other services include personal services like hairdressers, spa’s, laundry services, barber shops and religious services. It also includes parking lots. This sector will contribute up to 12,000 jobs to the Oregon economy and grow by 20%. Other fast growing sectors will include: private healthcare and social assistance, professional and business services, manufacturing, and information services.

As more and more people move to Oregon for work, the population is expected to increase and the demand for housing and services is expected to grow exponentially. As a result, anyone who owns or is planning to invest in land and real estate in Oregon will be well placed to take advantage of this demand and make a good return on their investment.

The Beaver State consistently ranks in the top 10 most beautiful states thanks to its lush greenery, diverse landscapes and geographical features, quaint towns, and Mediterranean climate. It is also one of the few states that are beautiful every season, with vibrant springs giving way to balmy summers, colorful autumn foliage, and ethereal winter landscapes. Thanks to strict land-use policies and conservation measures, the state consistently ranks in the top ten for air and water quality.

From the north where it borders Washington State to the Southern border with California and Mexico, Oregon is a state of contrasts. Here, snow capped mountains border lush forests, crystal clear lakes are cheek by jowl with bucolic farmlands while desert landscapes enchant the central and south-eastern parts of the state.

Whether you prefer a desert landscape, want to live or visit lake districts or simply wish to enjoy some scenic views, Oregon has something for you. Some of the top natural attractions in Oregon include the Oregon coast where you can enjoy rocky headlands, caves with sea lions, haystack rocks, and many others. You can also head to Oregon’s highest point, Mount Hood, and enjoy y skiing, hiking trails, and picnics. Hell’s canyon is another popular attraction where you can view gorges that are deeper than the Grand Canyon or hike the trails.

Measuring just a few thousand square feet short of 100,000, Oregon is among the top ten largest states in the USA. 39.6% of Oregon’s land is private, making it ideal for transfer between parties who want to buy and sell. The average population density in the state is 43 people per square mile although cities like Portland and Salem have significantly higher densities. Compared to states like the District of Columbia and New Jersey, Oregon has plenty of room for anyone who want to invest in land.

Oregon also has a special land use policy that ensures that uninhibited growth does not encroach on the state’s forests and farmlands. Oregon’s land use planning system aims to conserve as much of the state’s natural habitat and wildlife as possible while making it possible for developers and homeowners, cities and municipalities to take part in development activities that provide adequate housing while ensuring economic growth.

Oregon’s land use program was created in 1973 when the Oregon Land Use Act was passed by the Legislative Assembly. This Act required that all cities and county adopt comprehensive plans that met mandatory state standards. These plans must meet Oregon’s 19 planning goals that govern land use, development, transportation, housing, and conservation of natural resources. As a result, urban development has been limited to cities, while large areas of Oregon remain open and unfettered by unchecked development.

Cons of owning land in Oregon

While there are many advantages of owning land in Oregon, there are also a few cons. The first of these is that the cost of living is higher in Oregon compared to other states. This is due to several factors including the fact that housing costs a lot more in Oregon compared to other states. This is especially true in the western part of the state where cities like Salem, Eugene, and Medford are located. Here, house prices are at least 50% higher than the national median. In fact, houses in seller’s markets can top the $500,000 mark, making them out of reach for many potential buyers.

Another pro of owning land in Oregon is that income tax rates are higher than in other parts of the country. The state has a graduated tax rate ranging from 4.4% to 9.9%. This means that the higher your income, the more taxes you will pay. In addition, some counties collect local taxes and an income tax is also applied on corporate income of between 6.6 – 7.6%. Local governments also levy property tax rates and the average Oregon homeowner pays about $3,000 in property taxes annually.