What Is Considered Developed Land? 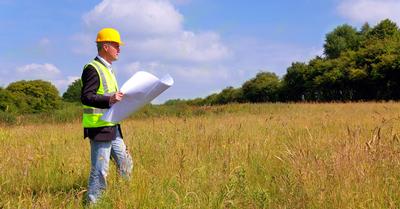 Land developments can vary across the board depending on a number of different features and classifications, but what is actually considered developed land?

Technically, developed land is considered to be any property or land parcel that has been modified in any way by humans. The land classifications for developed lands are primarily residential, commercial, agricultural, transportation, infrastructure, and recreation.

It’s a common misconception to consider land developments to be exclusively within large or small urbanized areas. With that being said, land developments can be a bit vague in some situations, as there are many land parcels that have undergone minor development projects and modifications, which makes them more challenging to identify. Ultimately, land developments are scattered around the United States with many different classifications and subcategories. To help you understand this better, we are going to take you through the different types of land considered to be developed.

What we consider to be developed land is classified by the United States Government or your state county’s local building authority. Land classifications can also be determined by private property owners, depending on the development projects that they pursue on their land.

Determining the legitimate classification for developed lands is generally a relatively straightforward process in most situations. This is especially the case for land developments that are located in typical areas such as cities, towns, and rural living environments.

With that being said, there are a lot of additional types of land developments, which are easy to overlook or misinterpret. An important aspect of land developments to note is that a developed parcel of land is any property (public or private) that has had even the slightest type of modification or enhancement done to it.

This means that the majority of land parcels that have not been classified as raw land will likely have had a certain level of development. A good way to view a land parcel that is considered developed is to assess whether the property has in any way been utilized by people or has been changed from its original, natural state. Let’s dive into some of the different types of developed lands we have in our nation.

The most common type of developed land that you will likely see will be land intended for residential use. Regardless of whether they are located in an urban environment or a rural area, residential lands can be found all over the country.

Residential land parcels are generally determined by their intended land use and are developed as such by a private property owner or building organization. The most common way to spot residentially developed land is to locate neighborhoods within urban suburbs or apartment buildings outside of business districts. Here are some examples of common residential developments you will likely see:

This occurs in just about all counties within the United States, as land developments generally need to be declared before any sort of build can begin - this is especially true for large and even small urban environments.

Land developments that have been established for commercial use can be found in urban and rural areas. These developed land parcels can vary greatly, as commercial businesses are quite different across the board.

The most common commercial land developments will be found within urban living environments, which can range from small businesses, franchises, and corporations. These properties can be considered developed lands based on the intent of the property use. Here are some examples of commercial business developments:

However, there are many other types of commercial land developments that are located in rural environments, which are likely set up as industrial businesses. Let’s take a look at some large-scale commercial business developments:

Regardless of the size of the commercial operation, if it is intended for business purposes and has been modified, it would be considered developed land - this would also include any land parcel that is being utilized for harvesting natural resources (not just processing).

A very common land development to misinterpret is a property that is being used for agricultural purposes or has simply been modified for future farming operations.

The United States has millions of acres of lands that are designated specifically for farming or have been reserved for farming. This can be a bit confusing, as a lot of our farmland has seen very little modification done to it or has simply been left untouched in its raw untouched state.

In addition, you will likely see other agricultural lands that are not growing crops but are rather producing cattle or another animal product. These lands will also be considered agriculturally developed lands, as they have been designated for a specific type of property use.

With that being said, agricultural developments can be much trickier to spot, as not all farmland will have crops or cattle on the land. This could be due to a farm being abandoned or it may be a new farm that has not commenced its operations yet.

Determining whether farmland is considered developed can often be interpreted by whether the agricultural land has been modified in any way for agricultural production. Some key things to look for would be a fencing perimeter of the property, irrigations systems, various buildings and structures, utility access, and other farming-related developments such as soil manipulation.

Whether you are living in a small town or a large city, you will likely have some form of recreational development within your reach.

Any land set up for these types of recreational activities would qualify as a land development. However, there are some recreational properties that fall into a grey area in regards to development. These recreational areas are generally relatively untouched and in some cases may even be left in a raw state.

The land developments in the United States designated for transportation and infrastructure make up an enormous amount of our total national developments.

Our transportation projects are a major part of our infrastructure program and require a lot of developments to take place. The most common being our roads. This can include everything from our large highways to a casual road in a small town.

Transportation developments can vary in size and do not necessarily need to be established by a state or federal government. Many individuals residing in rural environments need to modify their properties to allow public or private access by creating roads.

However, the majority of developments pertaining to transportation & infrastructure will be handled by the government to establish new roads, bridges, and highways, as well as the maintenance of old infrastructure.

With that being said, there are many other additional infrastructure-related land developments that may be easy to overlook. In order for private properties to have access to basic utilities, the government needs to create the infrastructure that can make it happen. This means that any land that has been modified for access to plumbing, electricity, or water would be considered developed land.

As mentioned above, there are a number of factors with land developments that can make determining their classification challenging and obscure. This is especially the case for properties that have little to no modification or maintenance.

Land parcels that seem relatively untouched can easily be considered to be raw lands that have not seen any development from humans. However, there is often more happening beneath the surface of these perceived untouched lands that would change their classification. Let’s take a look at some factors you should consider when evaluating these lands.

A vacant property will generally have very little development or none at all. If the vacant land parcel has been left in a raw state without any form of modification, then it is likely a raw property and would not be considered developed land.

With that being said, many vacant land parcels will have had minor developments on them, which result in the property status changing. If a vacant land parcel is located in an urban area (especially a large city), it will often be the case that the property has received some form of alteration, maintenance, or upkeep.

This would in turn make the property a developed parcel of land - yet it would retain its vacant status. In addition, an easy way to determine if a vacant land parcel is developed is to check whether the property has any connected access to utilities.

However, you will find that there are some vacant properties that are located in rural areas that may appear to be undeveloped at first glance. If the rural, vacant property has been changed in any way for agricultural purposes, been used for resource harvesting, or has any form of foundation for residential use, then this vacant land would be considered to be developed.

These private conservation lands are known as conservation easements. A property that falls under this classification is protected under a certain level of environmental protection and can greatly vary in the amount of development that it has.

The reason for this obscurity is that the private property owner has relinquished certain developmental rights to their land in exchange for getting conservation protection on their property. The development rights are discussed and agreed upon by the private property owner and a land trust organization. If the property has significant environmental qualities that are worthy of protection, it is common for the land to remain in a raw and completely undeveloped state.